A £3 million collection of jewellery once owned by Wallis Simpson went on display ahead of its auction at Sothebys.

The pieces chronicle Mrs Simpson's scandalous affair with Edward VIII that shocked Britain and led to the King abdicating in 1936 for the woman he loved.
Messages of love and support are inscribed on some of the items that also document Edward's brief period on the throne and his married life with the American. 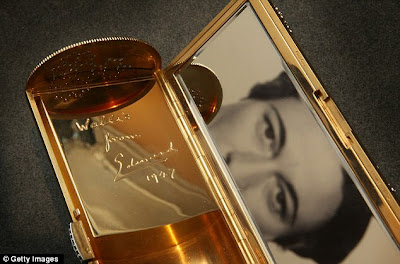 The 20 pieces, many made by Cartier, were first sold in Geneva 23 years ago with a host of other objects owned by the Duke and Duchess of Windsor, as the pair were later titled.

Sotheby's will auction the collection in November but is exhibiting the pieces in London until September 29 before showing the items in Hong Kong, Moscow, New York and Geneva.

The objects are not only beautifully preserved, incomparable examples of the genius of Cartier in collaboration with the Windsors, but also pieces whose inscriptions tell the story of perhaps the greatest love story of the 20th century, the romance that led Edward VIII to abdicate the throne of Great Britain.

Highlights of the sale include an onyx and diamond panther bracelet and a flamingo-shaped ruby, sapphire, emerald, citrine and diamond clip, both by Cartier and estimated to fetch up to £1.5 million each. 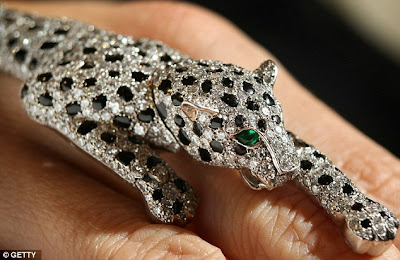 The jewels not only represent the height of fashion at the time they were made but give an insight into the life of the famous couple, and many pieces in the sale are dated and bear inscriptions of an intimate nature.

A diamond dress suite estimated to make £90,000 and made by Cartier in 1935 is engraved with the initials W and E and the inscription 'Hold Tight' - a phrase used by the Duke and Duchess in their correspondence during the abdication crisis.

The Duchess' favorite diamond Cartier bracelet, which supports nine gem-set Latin crosses, has one cross engraved with a reminder of an assassination attempt against the King - 'God save the King for Wallis 16.VII.36'. 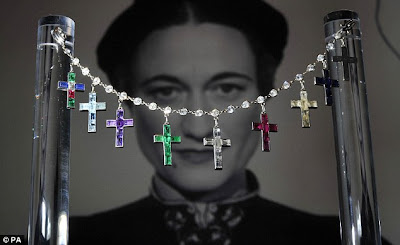