The Diva we ALL Loved. 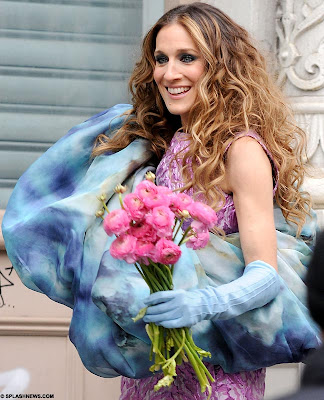 Our lives seemed to change forever when we met Carrie and Co.
What was it about Carrie that made us take her to our hearts?

Here’s some other facts about Sex in the City that you might not have known:

i)The tutu that Carries wears in the opening credits was nearly a Marc Jacobs slip dress.Producers initially didn’t like the tutu, but were forced to stick with it when traffic prevented them re-shooting the “bus-splash” scene. Now that tutu, will stay with us forever!
The ballerina tutu cost only $5 from a vintage store New York.

ii) The medicine cabinet in Carrie's apartment was first spied by Sarah Jessica Parker at a flea market shortly before filming began on the series. She and Matthew Broderick didn't buy it but reconsidered. When they went back, the cabinet was already sold to "some TV show". When she showed up for filming, the medicine cabinet was there.

iii) Manolo Blahnik delivered the truckload of shoes to the set of the latest movie because the sales of the Hangisi (the blue stain shoe that Big gave to Carrie when he proposed). Wouldn’t you have LOVED to have been there?
Being that I live in Spain (the birth place of Manolo) I think I will do a future posting on this great man; the ‘God of Shoes’ who I know we all pray too daily and think should be canonised into Saint Blahnik!.

iv)Cynthia Nixon does not have pierced ears. All of her earrings on the show were clip-ons. Sometimes the costume designers would send away earrings they liked to a jeweler to make them clip-on earrings.

v) From the very first season up to the 12th episode of the 4th season, in the opening credits, Sarah Jessica Parker's name was shown with the World Trade Center towers behind her name. After the terrorist attacks on the USA of 11 September 2001 and the collapse of the towers, her name then appeared with the Empire State Building in the background. The same thing happened with the show's main title.

What’s your favorite memories of SATC? What appealed to you about this series? Who is most similar to you of the 4 girls?
Would love to hear your comments.