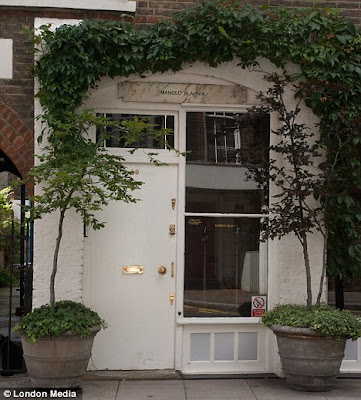 I used to pass this gorgeous town house every day when I lived in London 9 years ago. I never really gave it a second glance, although I always noticed chauffeur driven luxury cars waiting outside; but I still never thought twice about it, as it is quite common in this part of London.

However, with the introduction of Carrie Bradshaw and the gang, I now know that this very gorgeous townhouse is in fact the shop that all women revere. To say most women worship at this mans feet (feet is a big clue here girls!) is an understatement.

It is the gorgeous shop of none other than Manolo Blahnik. Surprised?

Here are some more facts and trivia that you may have not known:

*Jackie Onassis wore Manolos
*Madonna said his shoes were “as good as sex!”
*Princess Diana used to sit on the floor of his studio chatting to him while she tried on pair after pair.
*Sex and the City introduced his creations to a whole new generation.
*His father was from Prague and his mother was from Santa Cruz de la Palma in the Canary Islands
*During the war his mother learnt how to make her own beautiful shoes with the help of an island cobbler.
*His parents wanted him to become a Diplomat and shipped him off to the University of Geneva to study Law. But he dropped out after his first forensic medicine class when he passed out on the floor at the sight of the corpse.
*One of his earliest creations was for Ossie Clark.
*His first shop was a tiny boutique in Old Church Street, Chelsea.
*He keeps one of each pair of shoes he has designed; 25,000 shoes are arranged in date order in panelled cupboards that fill up two adjoining houses in Bath. Wouldn’t you love to play around in that house for a day or two?
*He tries on many of his creations to ensure they don’t snap (a sight to be beholden!)
*His first “pop-up” store will open in Liberty’s of London which will not only sell his shoes, but also umbrellas, notebooks, cushions, silk scarves and drawings from his shoe archive.

So there you have it, some facts/trivia on the Saint of Shoes. If you are lucky enough to be in London to visit the pop-up shop, I SO envy you!


p.s if you haven’t already entered our ‘Gorgeous Giveaway’, do scroll down and enter. The winner will win TWO fab prizes.