My Favorite Shop in the World (cont'd) ! 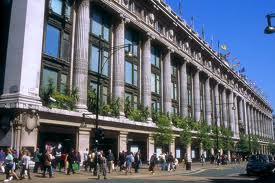 OK, so in my last post I said I would give you some trivia and tit-bits about my favorite shop in the WHOLE world-Selfridges.
I used to pop in at least three times a week when I lived in London, and now I miss it like crazy. It's so true when they say you don't know what you've got until it's gone!!!I'm sure that phrase wasn't intended for a shop, but never mind.

*In 2007, Hermes created two exclusive Birkin bags in the Selfridges yellow - Pantone 109. More than 1,000 people tried to buy them!

* By 1966, 'Swinging London' was in the midst of its own youth revolution. Girls wanted short skirts and long false eyelashes - and Selfridges obliged by opening their own in-store boutique, 'Miss Selfridge'. I had no idea Miss Selfidge opened so long ago.

*The store's external décor to celebrate the Coronation of King George V1 in 1937 was said to be the most opulent for any building in Europe. It was certainly the most expensive with a budget of £50,000, which would be £1,250,000 today

*In April 2005, 77 Elvis Presley impersonators sang 'Viva Las Vegas' as part of the store's Vegas Supernova event - earning themselves a place in the Guinness Book of Records for being the most Elvis impersonators gathered in one place.

There you have it, some tit-bits about my favorite shop.
What's your fav shop/shopping experience (because shopping in Selfridges really is an experience!)