He Loves Me? He loves Me Not?

Last week saw a wedding here in my "adopted" city of Seville. The wedding of the loveable but eccentric Duchess of Alba (aged 85), to her "toyboy" (aged 61). 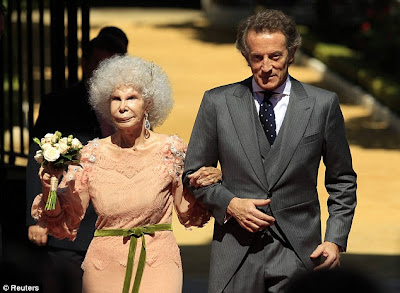 The deed has been done

I really didn't have an opinion, so asked some of my Spanish clients and friends, was this really a love union? Here are some things I learnt about the Duchess and her celebrated union:

*She is the most noble/titled woman in the world. If she meets Queen Elizabeth II, the Queen must curtsey to her. 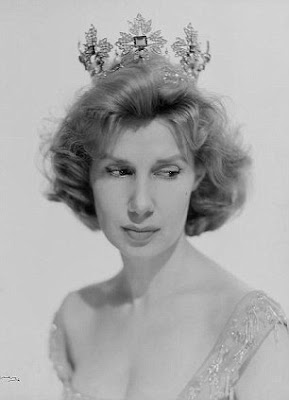 Before the perils of Botox and plastic surgery!

*She is descended from King James II and related to both Winston Churchill and Princess Diana
*Her library alone is valued at 36 million pounds and includes Christopher Columbus's first map of America
*She was listed in Vanity Fair's Best Dressed List along with Lady Gaga
* A client of mine here in Spain,who used to be her "Maid of Honour" at all the Debutánte balls told me that "ordinary" Spanish people love her. But the high society of Spain (and especially Seville) are embarrased by her antics and wish she would not be such a "loose cannon".
*However, the citizens of Seville, love her. She is very close to the citizens of the city; she walks around without bodyguards, chats to people etc and has donated a lot of money to various charities in Spain, but particularly in Seville.
* Nothing is known about the past relationships of the Groom. Rumour has it that the Duchess has paid the Press Association (equivalent) not to say anything. Quite common here in Spain.
* She is very happy buying in markets even though she can afford the best designers in the world. Her wedding attire was made by Spanish designers Vittorio & Lucchino.
* She was a first class flamenco dancer when she was younger, learning from THE best flamenco dancer in Spain. 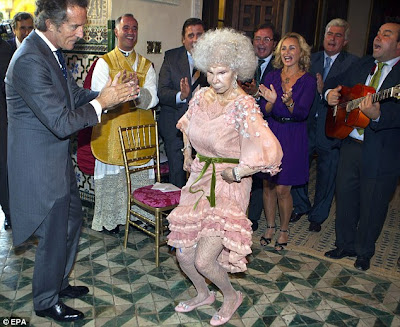 Not quite sure "strutting her stuff" was appropriate. But then again
it was her day, not mine ;-)

* She was the first woman in Spain to master the art of bullfighting whilst mounted on a horse. 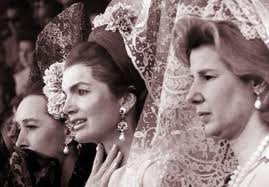 At the bull-ring of Seville with Jackie Kennedy.
Clearly poor Jackie O isn't enjoying what she is seeing.

But the big question everyone keeps asking is, are they in love? Everyone you speak to or listen too agrees she is definitely in love. Alfonso Diez (the Groom) is another question altogther. Everyone seems to unanimously agree that he is not in love with her.

What do you think?
*Was this an embarrasing spectacle that had the rest of the world ridiculing her/Spain?
*Should she be allowed to do what she wants even if it goes against protocol?
*If she loves him, why shouldn't she be able to marry at 85, or do you think it's ridiculous to get married at that age?
*Can true love exist between a woman of 85 and a man of 61?

I am still baffled by what I think.I would love to hear what the rest of the world thinks.